Want to play your Switch games, but are tired of lugging a crusty old console that can only run games? Then keep reading, and you’ll only need to take your Steam Deck with you to enjoy both your PC and your Switch games on the go.

Today we’ll be looking at the Ryujinx Switch emulator.

Before we begin, I’d like to quickly go over why I’m choosing to cover Ryujinx instead of the other prominent Switch emulator Yuzu.

To put it simply, I’ve tried both extensively, even going as far as making my own builds. What I can tell you from this experience is that while both are capable emulators, I found Ryujinx’s overall quality to be superior compared to Yuzu in terms of stability, ease of use and overall adhesion to code standards.

Your experience might be different, but nothing stops you from trying both and making your own decision. In the meantime, let’s take a look at Ryujinx.

UPDATE: Just after 24 hours that I’ve published this post, I’m proven wrong in the best way possible! Ryujinx is now available on Flathub, so if you want to install it via Flatpak and skip this whole section: open up Discover, search for Ryujinx and install it. Alternatively use this terminal command: flatpak install org.ryujinx.Ryujinx. If you did, you can skip right to configuring Ryujinx.

If you want to install Ryujinx the traditional way, keep reading.

First of all, go to desktop mode, open up Firefox and navigate to ryujinx.org. 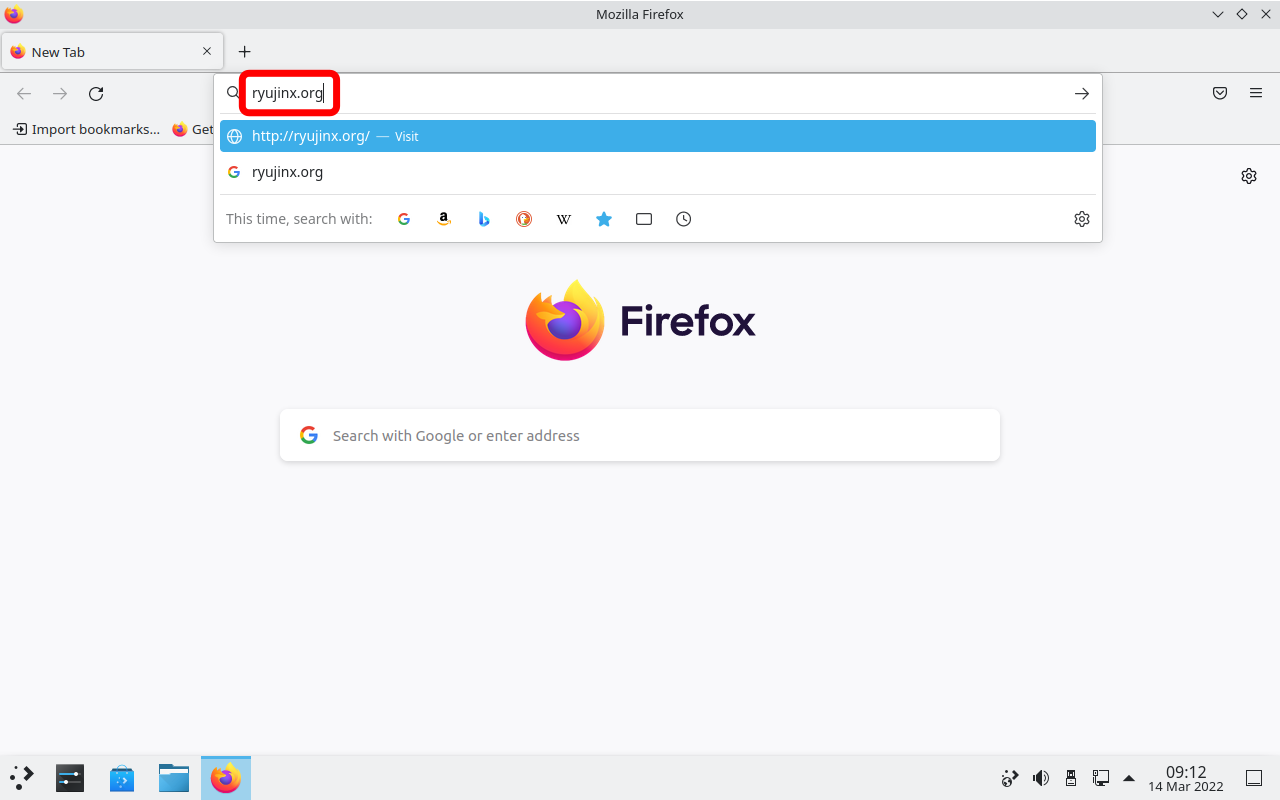 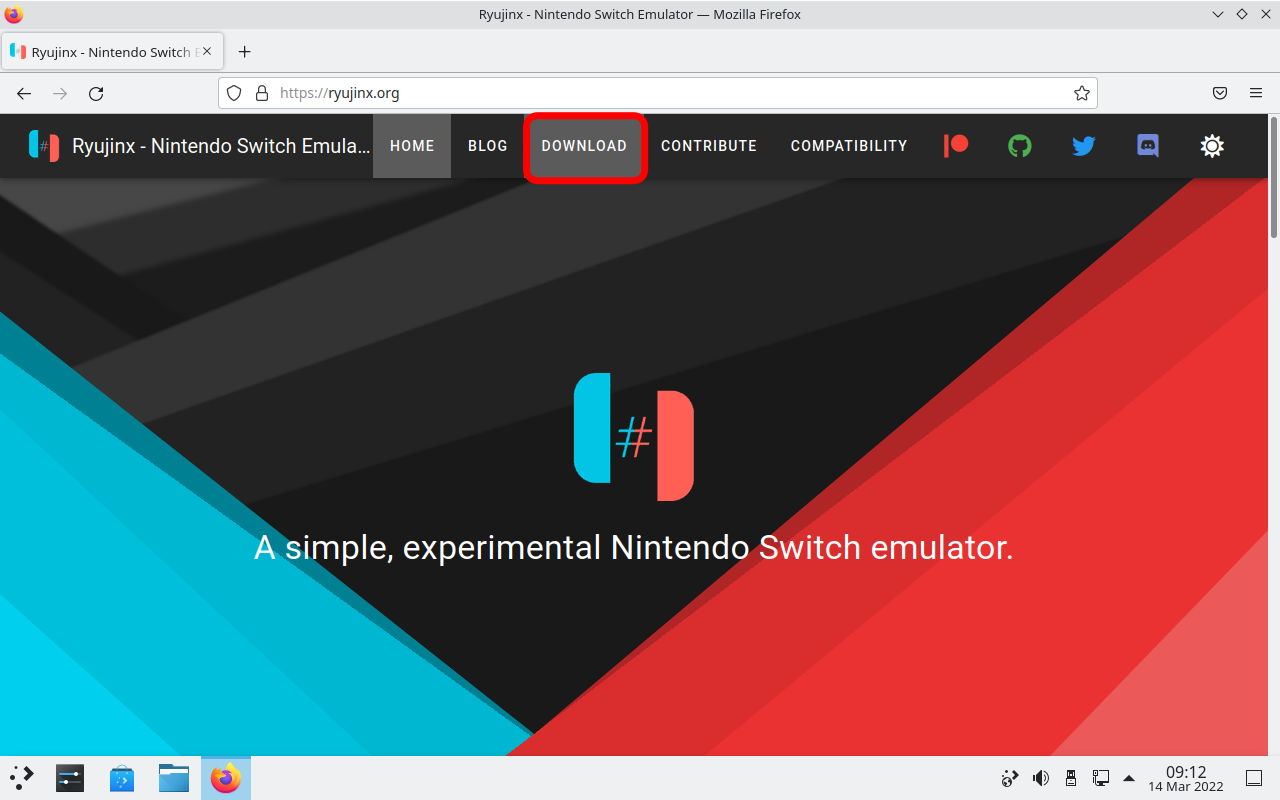 Then press the button with the Tux icon in the middle to download the Linux version. 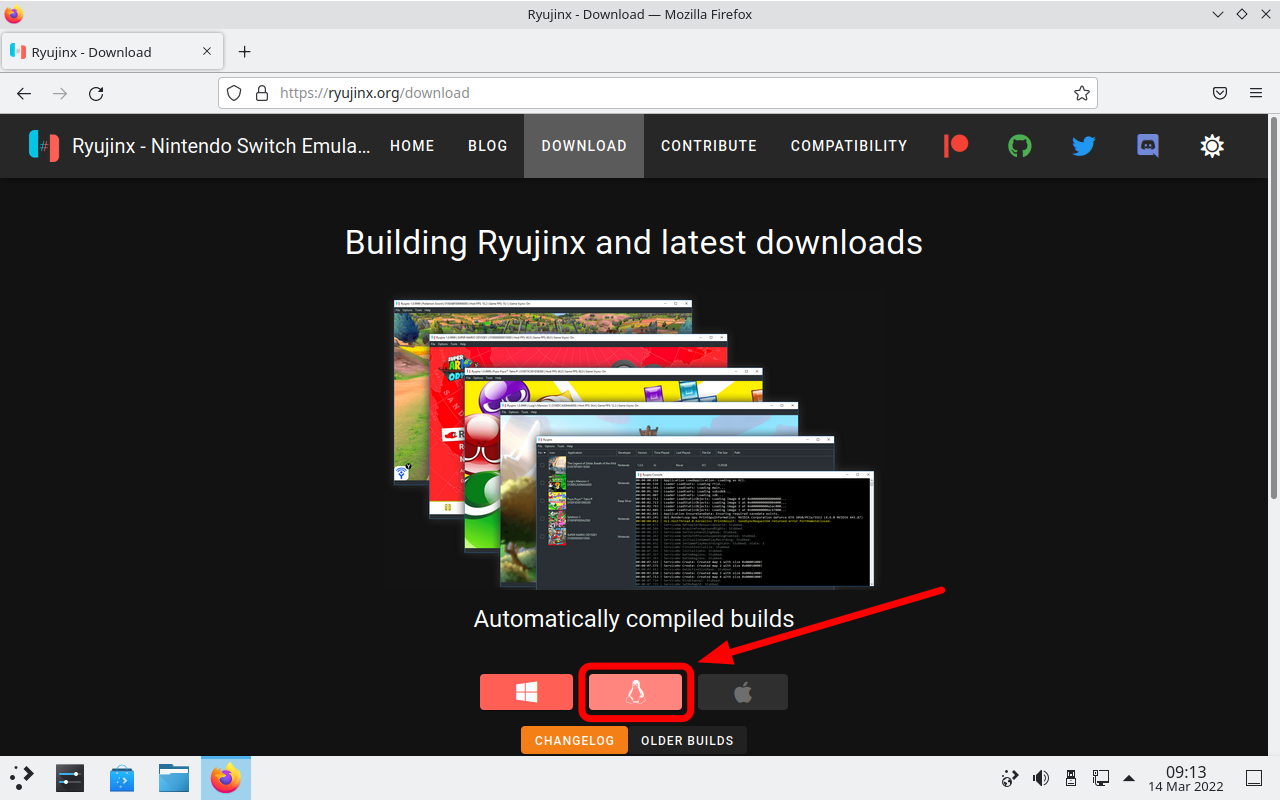 Select Save File, then press ok. 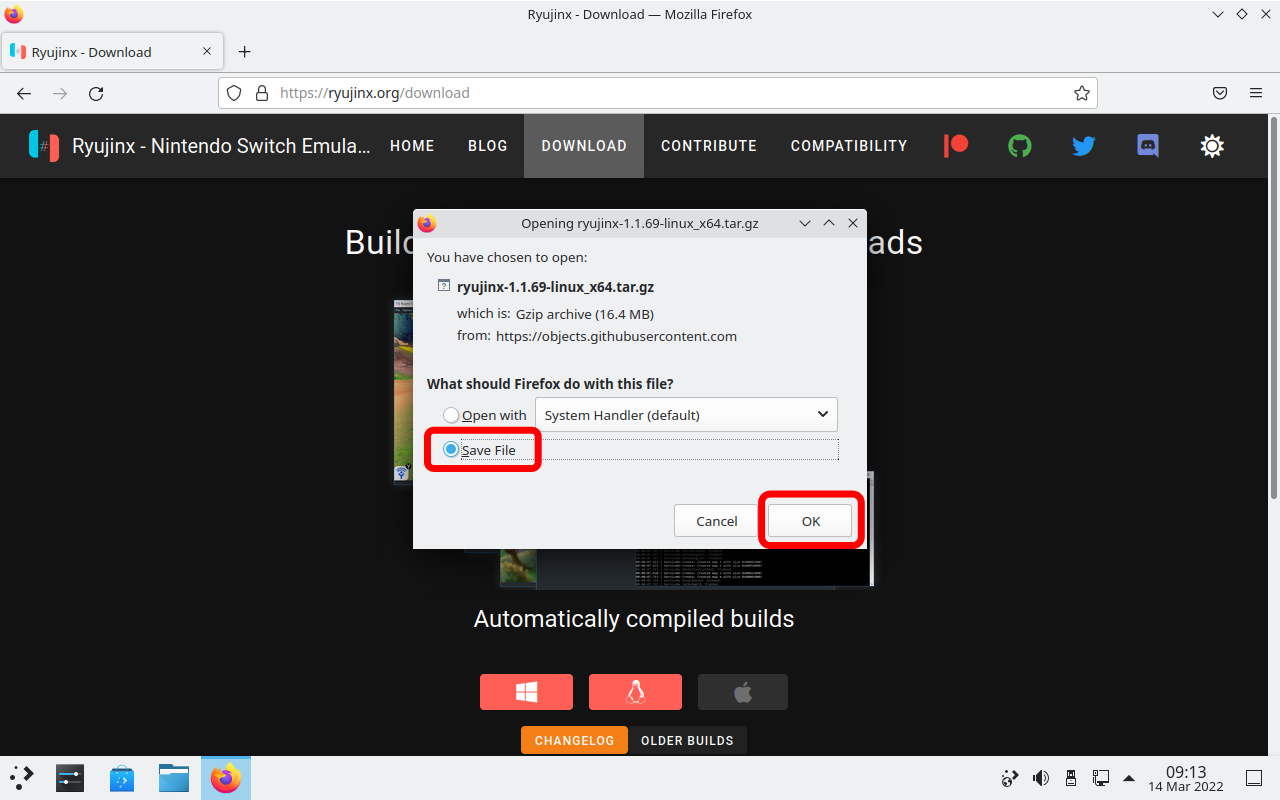 Open up the downloads menu in the top right, and press the folder icon to navigate to the file we just downloaded. You can now close Firefox. 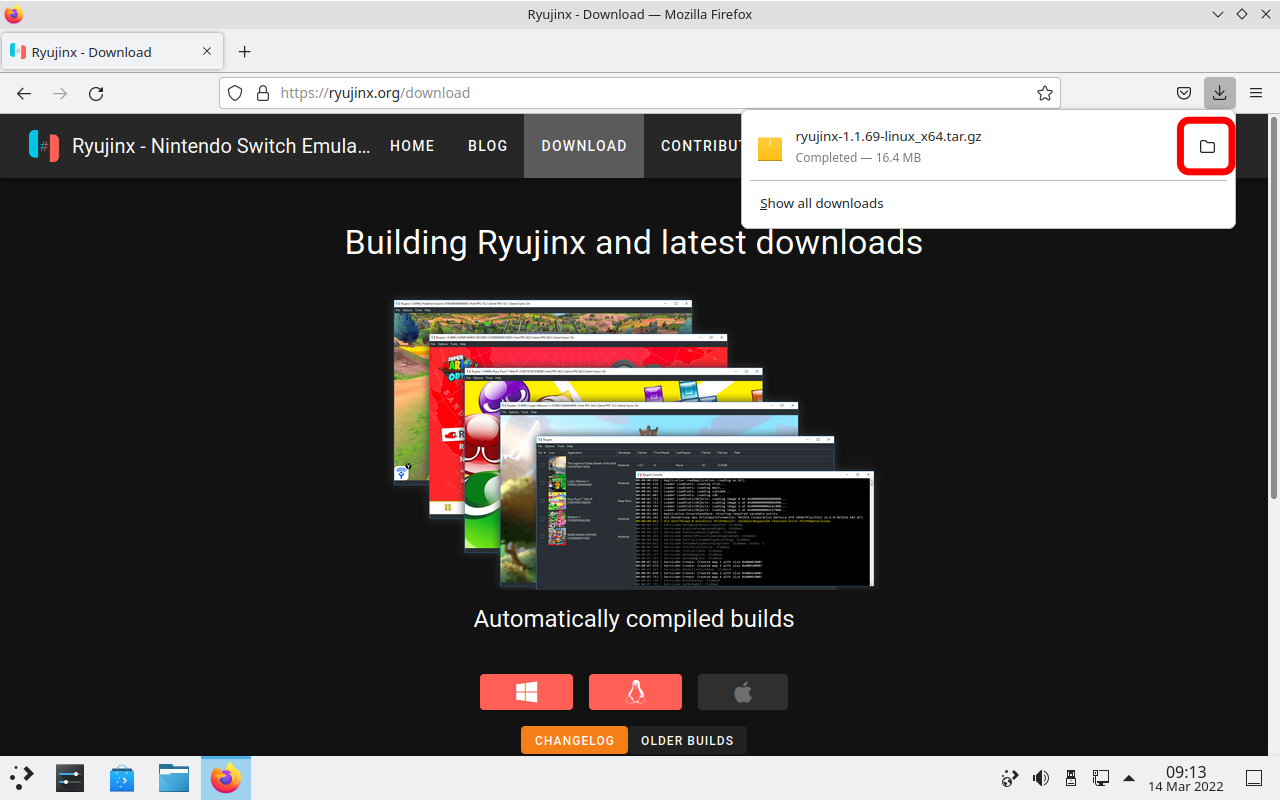 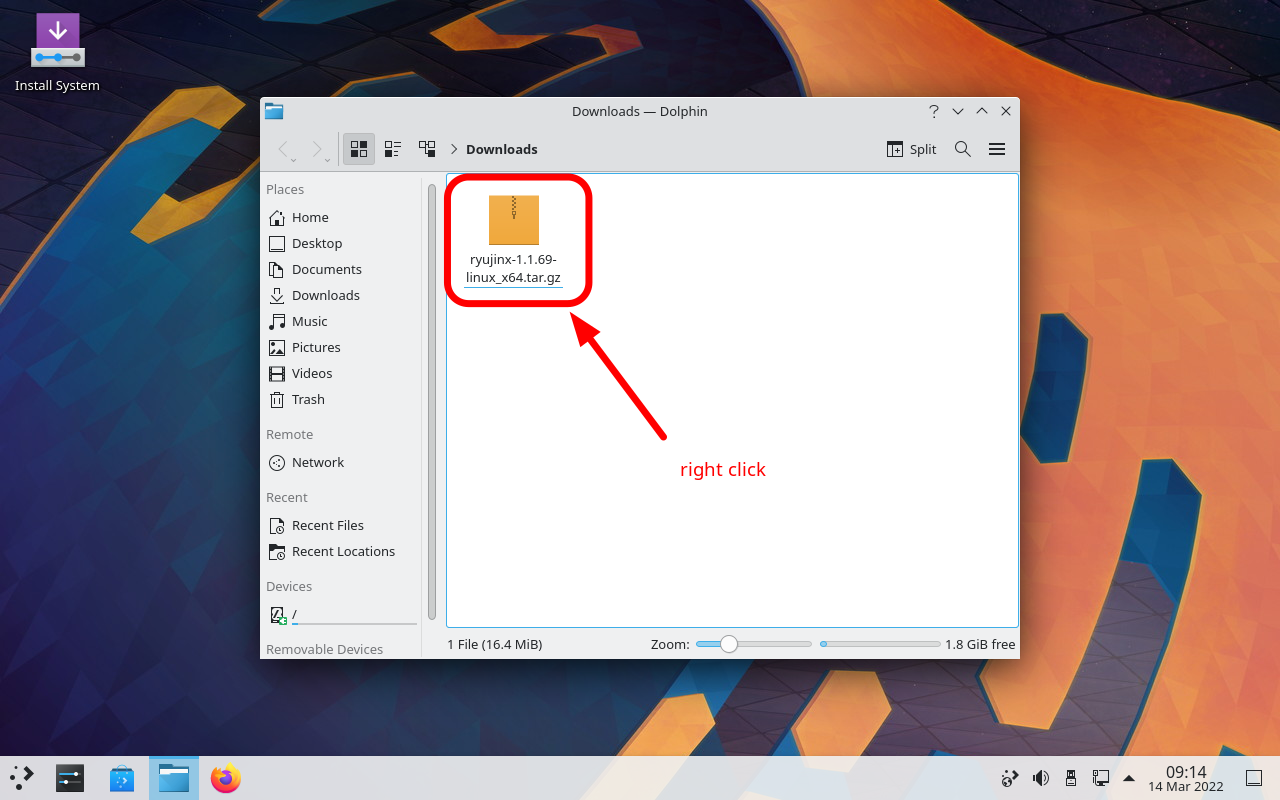 Under Extract, select Extract archive here. It will extract Ryujinx to a new folder called publish. 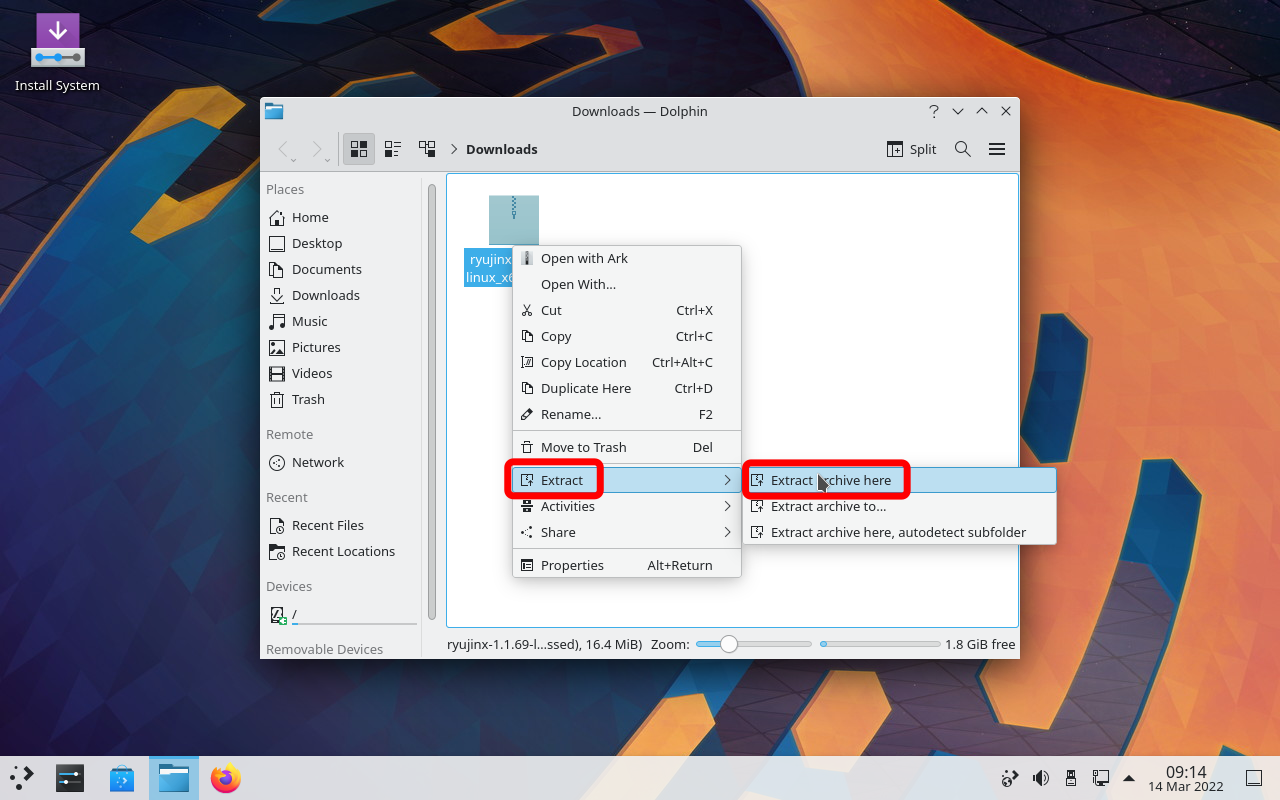 To make it easier to find in the future, we can rename this folder to ryujinx- followed by the version number. Then move this folder somewhere more accessible. For example, I have a folder in my Home called Apps, that’s where I keep applications I download this way. 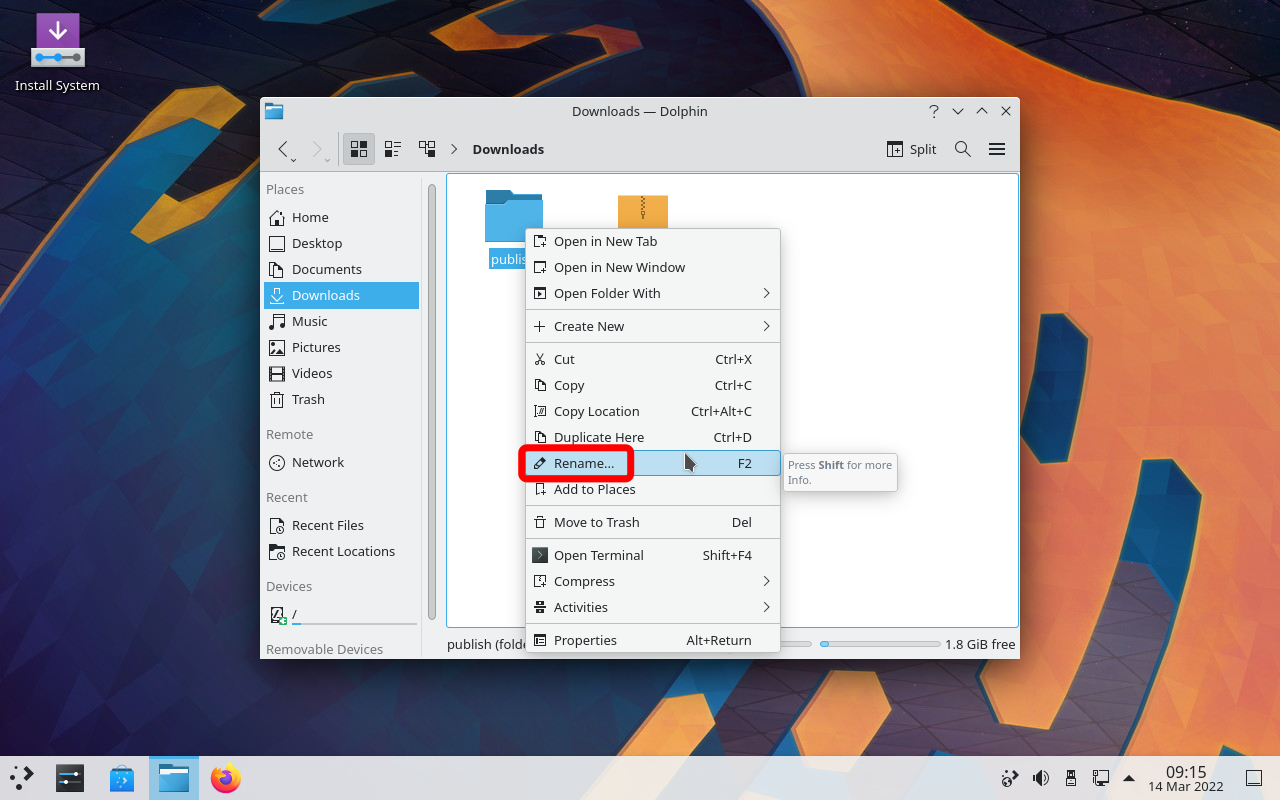 Open up the Ryujinx folder and you’ll see a bunch of files, most of which you don’t need to care about. Don’t remove them but just leave them there. The important one you’re looking for is simply called Ryujinx. 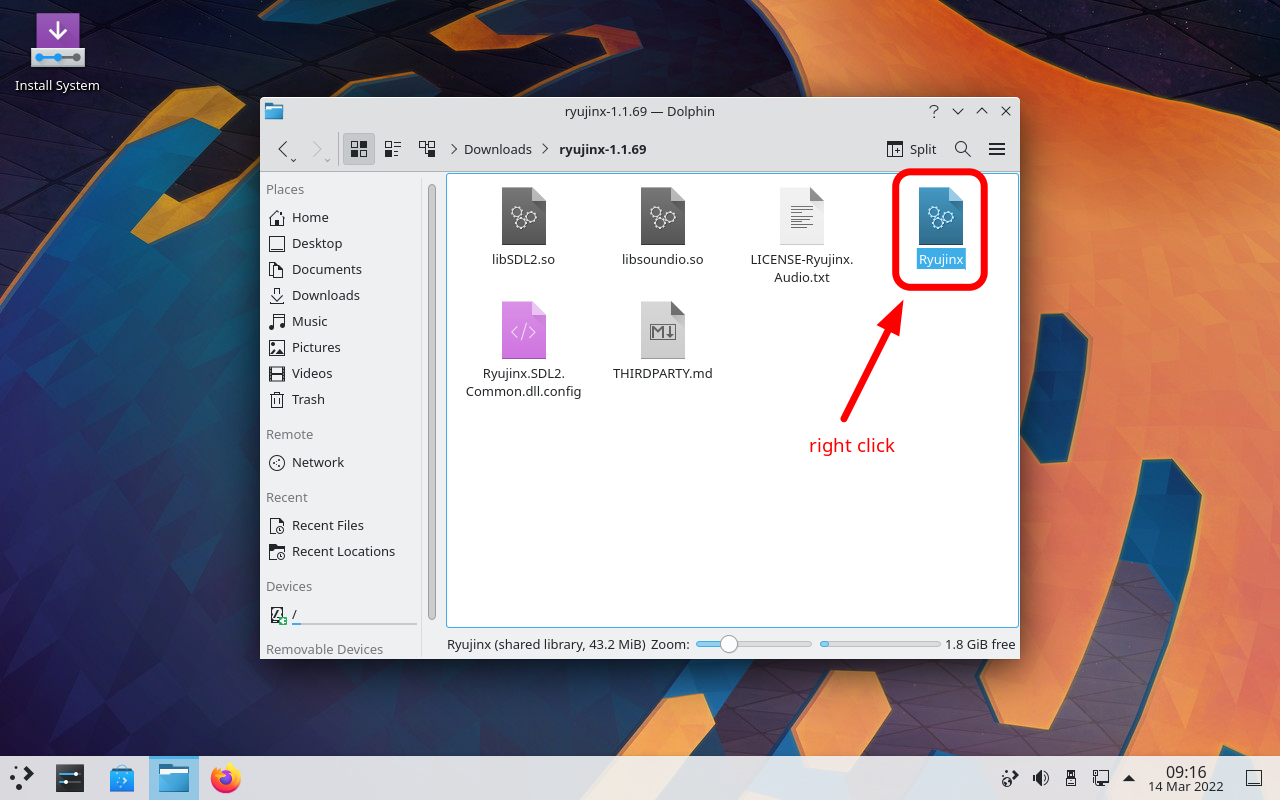 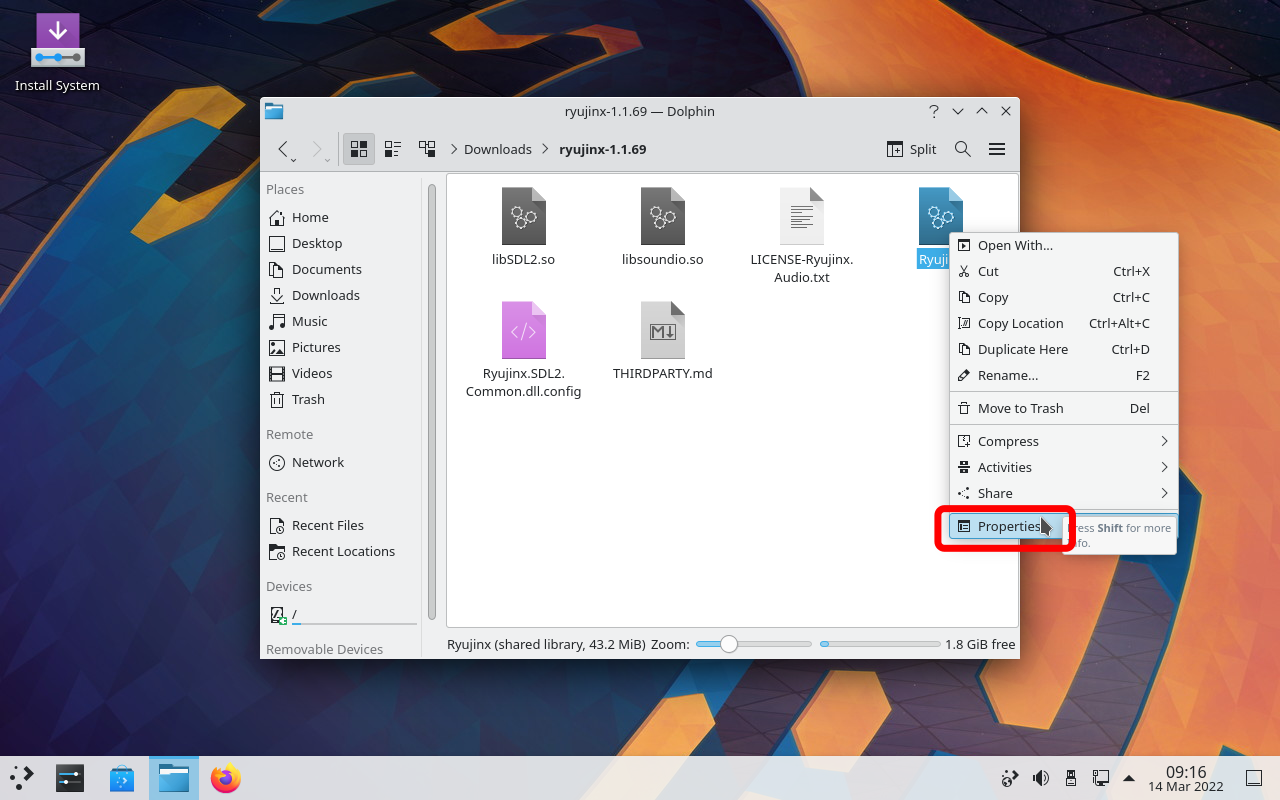 Navigate to the Permissions tab, then enable the checkbox saying Is executable. 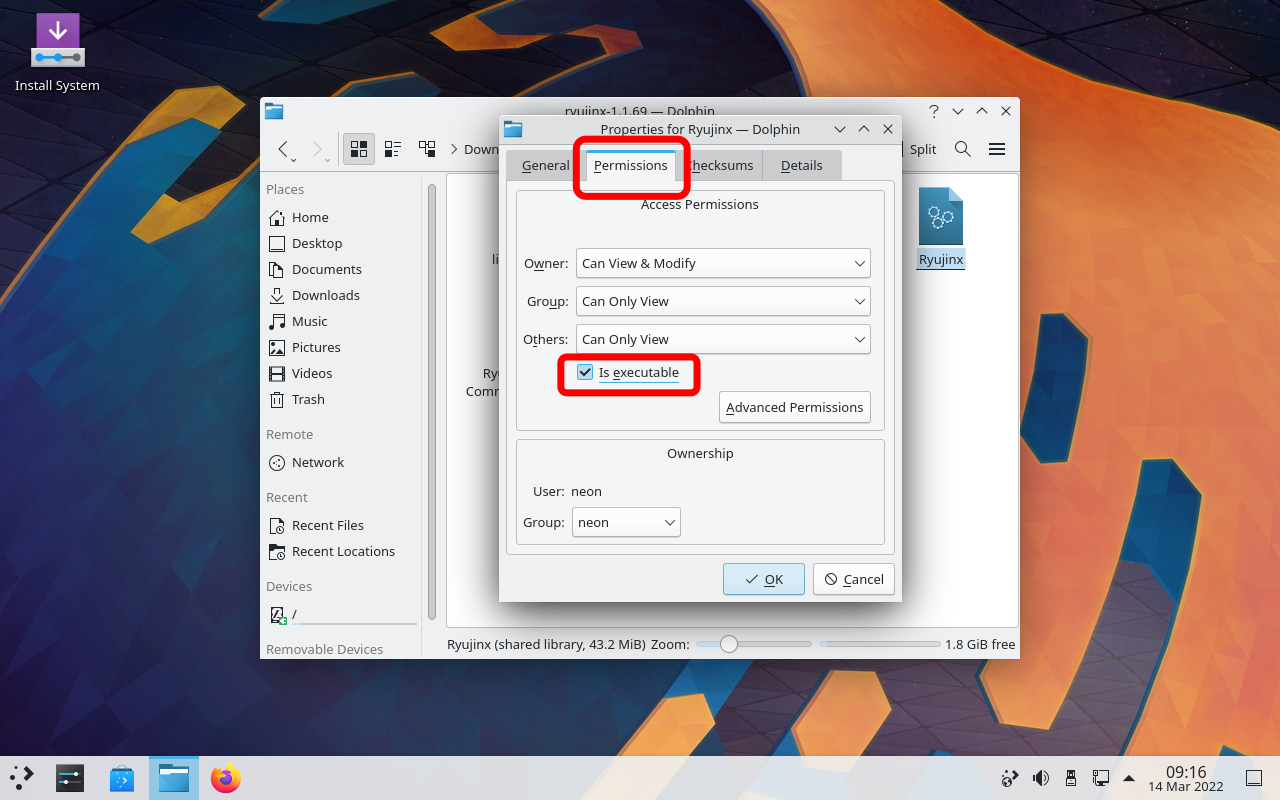 Just click on the Ryujinx file and it should launch. 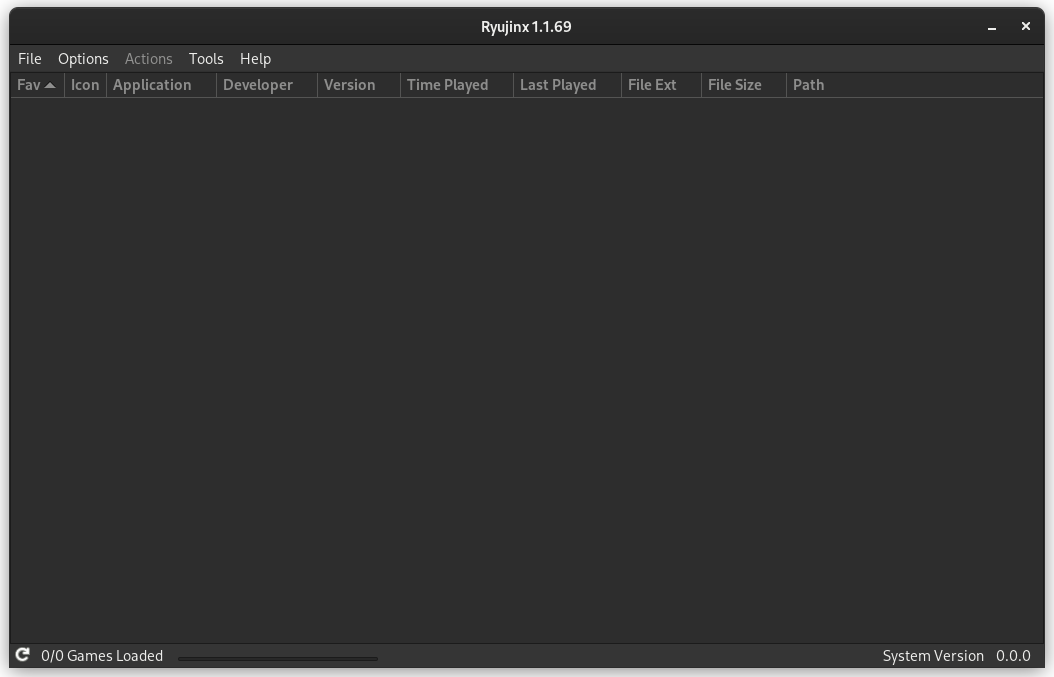 At this point unfortunately there isn’t much you can do with Ryujinx itself. You’ll need to get your hands on a modified Switch to be able to extract its firmware and dump your games.

The easiest way is to dump your game cartridge into an untrimmed XCI file, that should contain both the game and the firmware. I won’t detail this process here, but you can easily find proper tutorials on the internet.

If you need to use a prod.keys file, in the menu select File, then Open Ryujunx Folder. It will open a file manager window. You can place the prod.keys file in the system folder.

UPDATE: I’ve been told that on Deck File > Open Ryujinx Folder might not work. If that’s the case, you can navigate to your Ryujinx folder manually using the Dolphin file manager: 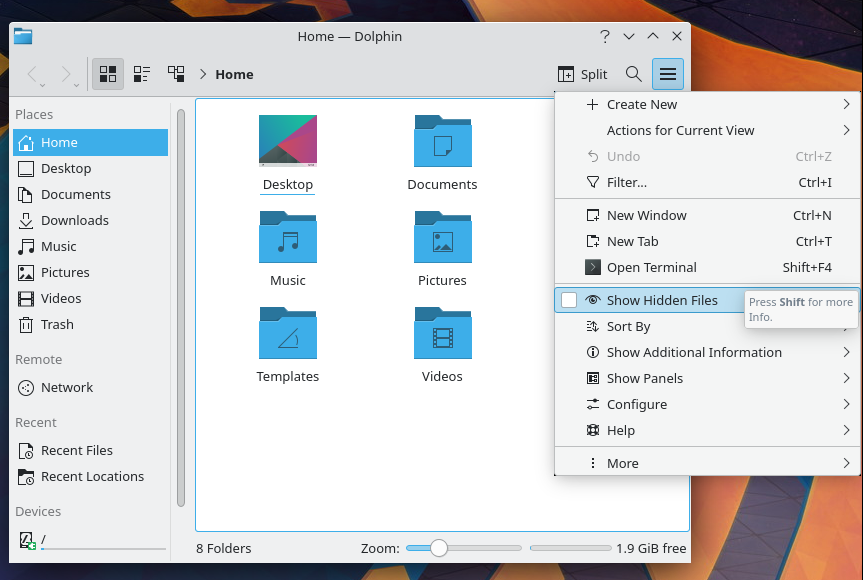 Once you have extracted your game as an XCI file, put it in your Steam Deck, in a folder where you would ideally collect all of your Switch games. I have a folder called Switch inside my home folder.

Now let’s get back to Ryujinx. In the top menu, click Options, then Settings. 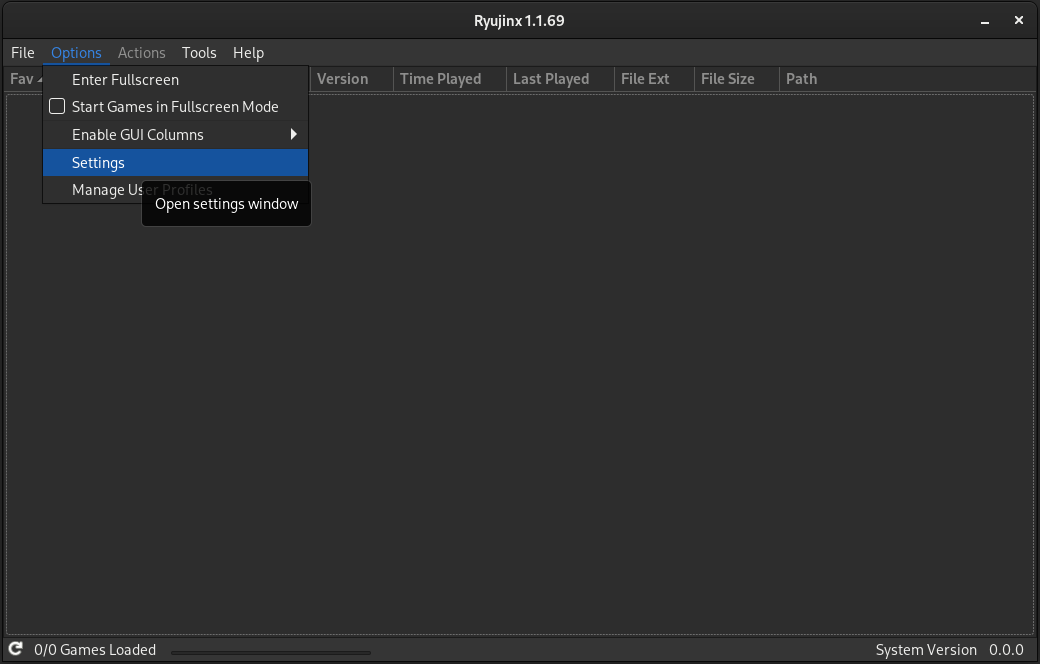 Press the Add button in the Game Directories section, then select the folder you’ve put your XCI files into.

Press Apply and then Save. 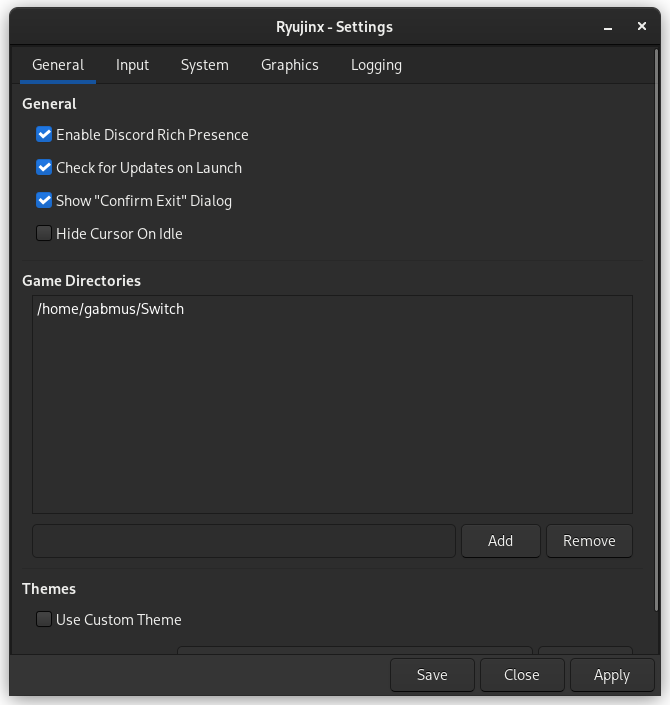 At this point you should see your games in the main Ryujinx window. Go ahead and double click on it. This will result in a dialog window popping up, asking you to install the firmware from the game you’ve dumped. Go ahead and press Yes, then press OK in the next dialog confirming that the installation was successful.

If everything went right, the game will launch. Congratulations! But we still need to configure the controls!

To stop the game, in the top menu select Actions and then Stop Emulation. 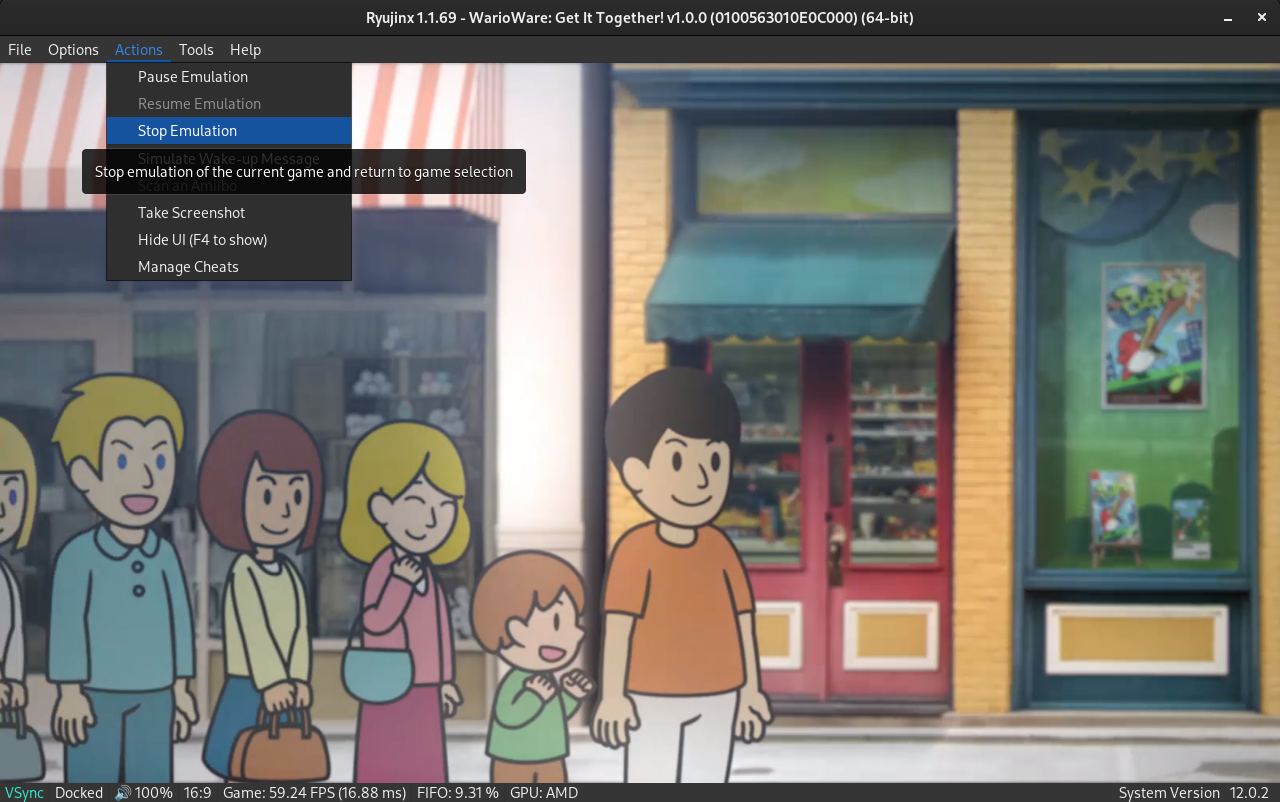 Select Options from the menu, then Settings. Select the Input tab on top and press Configure for Player 1. 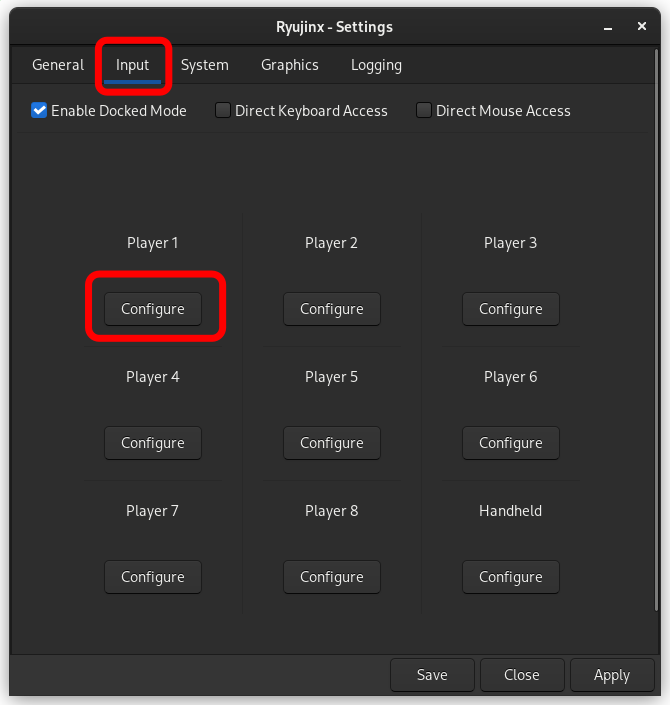 In this new window, first select your preferred input device from the Input Device menu on top. You should see your Steam Deck integrated controller in this list.

For the Controller Type menu, I suggest you select Pro Controller, as it’s the one that most closely matches a regular controller. 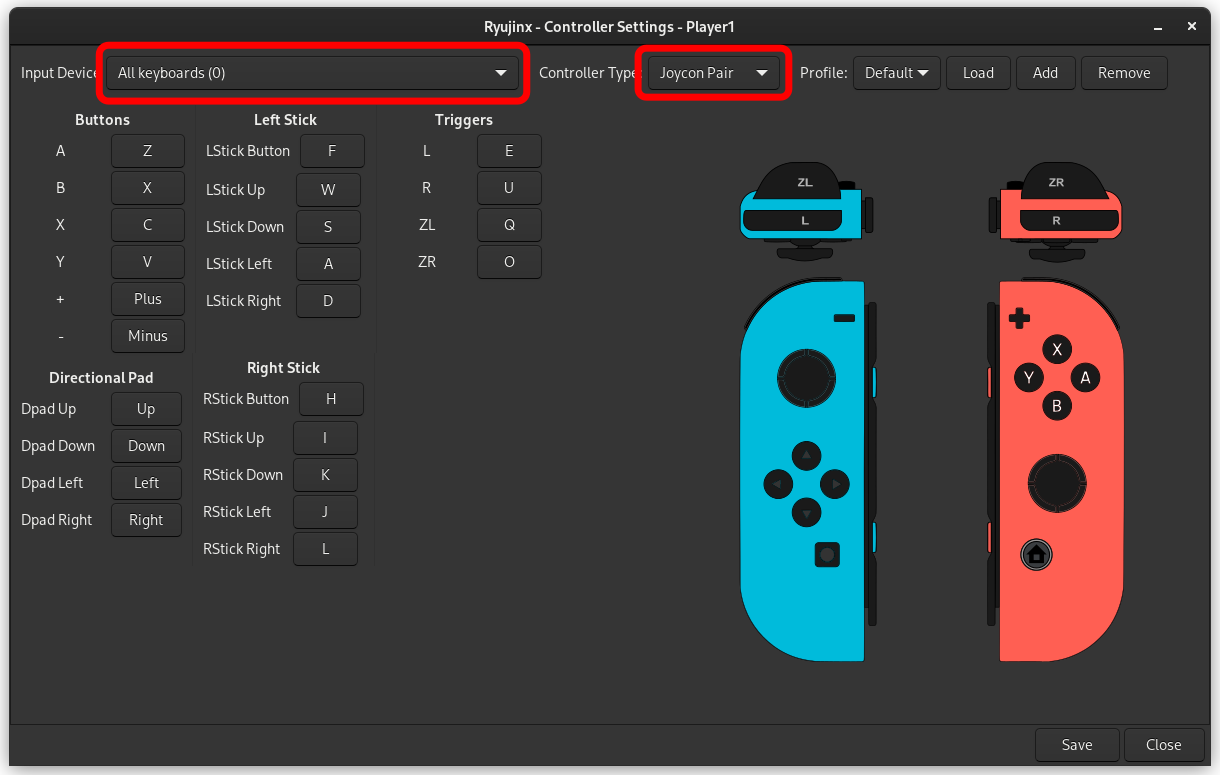 Now you’ll have to spend some time configuring all of the button bindings to your preference. Since the Steam Deck has a gyroscope, . UPDATE: I don’t have any games that make use of the motion controls, and I assumed it would have just worked. Apparently the setup is a bit more complicated, involving using third party tools. I hope to be able to detail this process in the future, but for now you’ll have to do without motion controls. 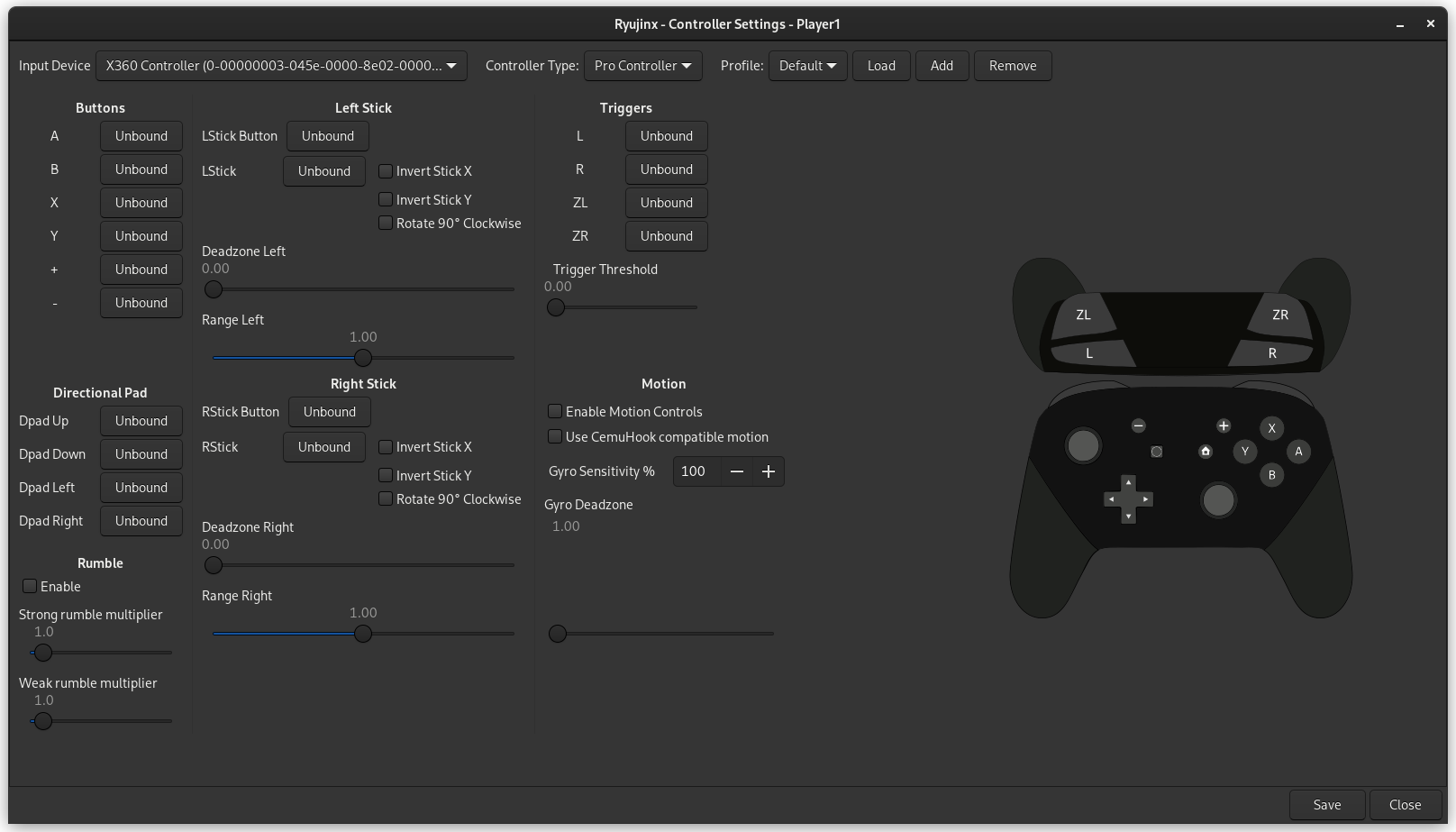 Once you’re satisfied with your bindings, press Save, then in the previous window Apply and Save.

And that’s it! You can now play your Switch games on your Deck!

As usual, let’s end this post with a quick note on compatibility: emulators aren’t perfect, so you’ll probably find some games that don’t work properly. To verify your game is compatible, you can check out the Ryujinx compatibility list page, search your game and see what you can expect from it.