ProtonDB: What Games Can You Actually Run on the Steam Deck?

As we all know the Steam Deck runs Linux, which is amazing! But at the same time most games out there are only made to work on Windows.

This problem has largely been addressed thanks to Proton. Wonder what Proton is? Read the beginning of this article I made about Proton GE to learn more.

Although Proton is great, and probably one of the biggest advancements in Linux gaming, it’s not perfect.

As you might have found by yourself, there are still some games out there that don’t play too well with Proton, or that just outright refuse to work. If you’re lucky, it will be possible to fix some of these games with a few manual tweaks.

Today we’ll explore ProtonDB, a websites that will help you figure out if a game is compatible, and if it needs any tweaks to run properly. 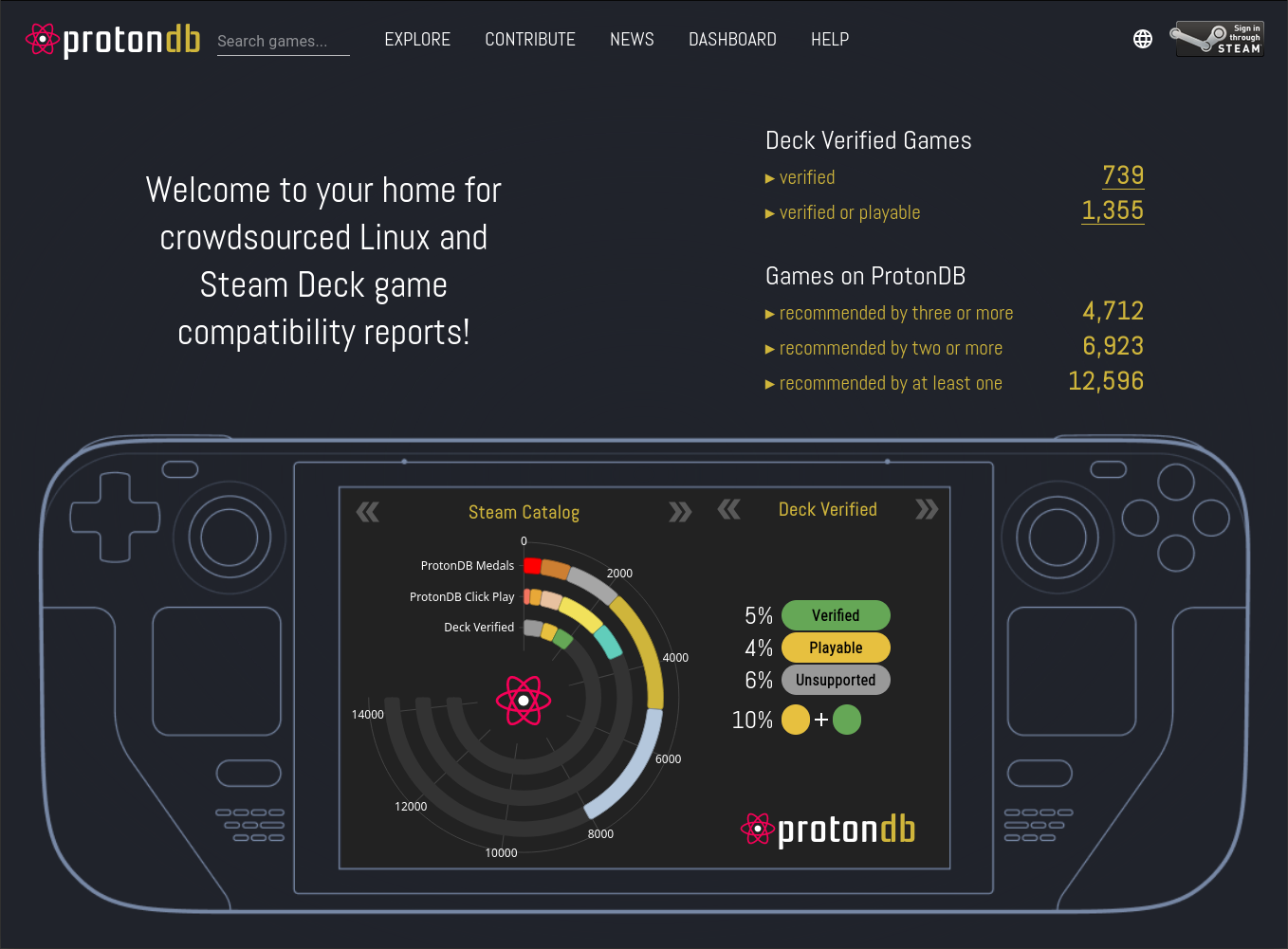 Opening up the home page, you’ll immediately see a very useful overview of what the Linux gaming scene looks like, with various indicators of compatibility, including Deck Verified, Medals and Click Play. Let’s see what they actually mean.

This pertains to data that’s coming directly from Valve’s Deck Verified program. This means that this indicator is at the same time the most reliable and the one that has the least data. These are games that Valve themselves deem either Verified on Deck, Playable with some caveats (like lack of controller support or small text on the Deck screen), or Unsupported, meaning they aren’t deemed playable on the Steam Deck.

A quick note about Unsupported games: a number of them are marked unsupported because they specifically won’t run on the Steam Deck, but might otherwise run on a traditional Linux PC. For example, this includes any VR game, even if it works on Linux, but since the Deck doesn’t officially support playing VR games they end up in this category.

This is a recent addition to ProtonDB, and it’s an indicator of how and if the game runs by just installing it and clicking Play. In other words, how the game plays without any tinkering.

This rating system has 5 tiers, from 1 being the best to 5 being the worst. Here are their descriptions right from ProtonDB:

This new rating system is pretty straight forward and in my opinion it’s your best bet if you don’t want to tinker with games in order to play them.

This is the old rating system ProtonDB has always used since its inception and it’s a descendant of Wine’s rating system (this really brings me back! We didn’t always have Proton, or even Steam on Linux for a very long time, and the WineHQ compatibility reports were what we used back then).

This rating system is a little more complicated, and it takes tinkering into consideration. Here’s how ProtonDB describes the various levels, from best to worst:

Now that you’re an expert on rating systems, let’s look for some games, and see how and if they will work!

On the top left corner of the website you can find a very convenient search bar. Let’s search for a game, for example Counter-Strike: Global Offensive. 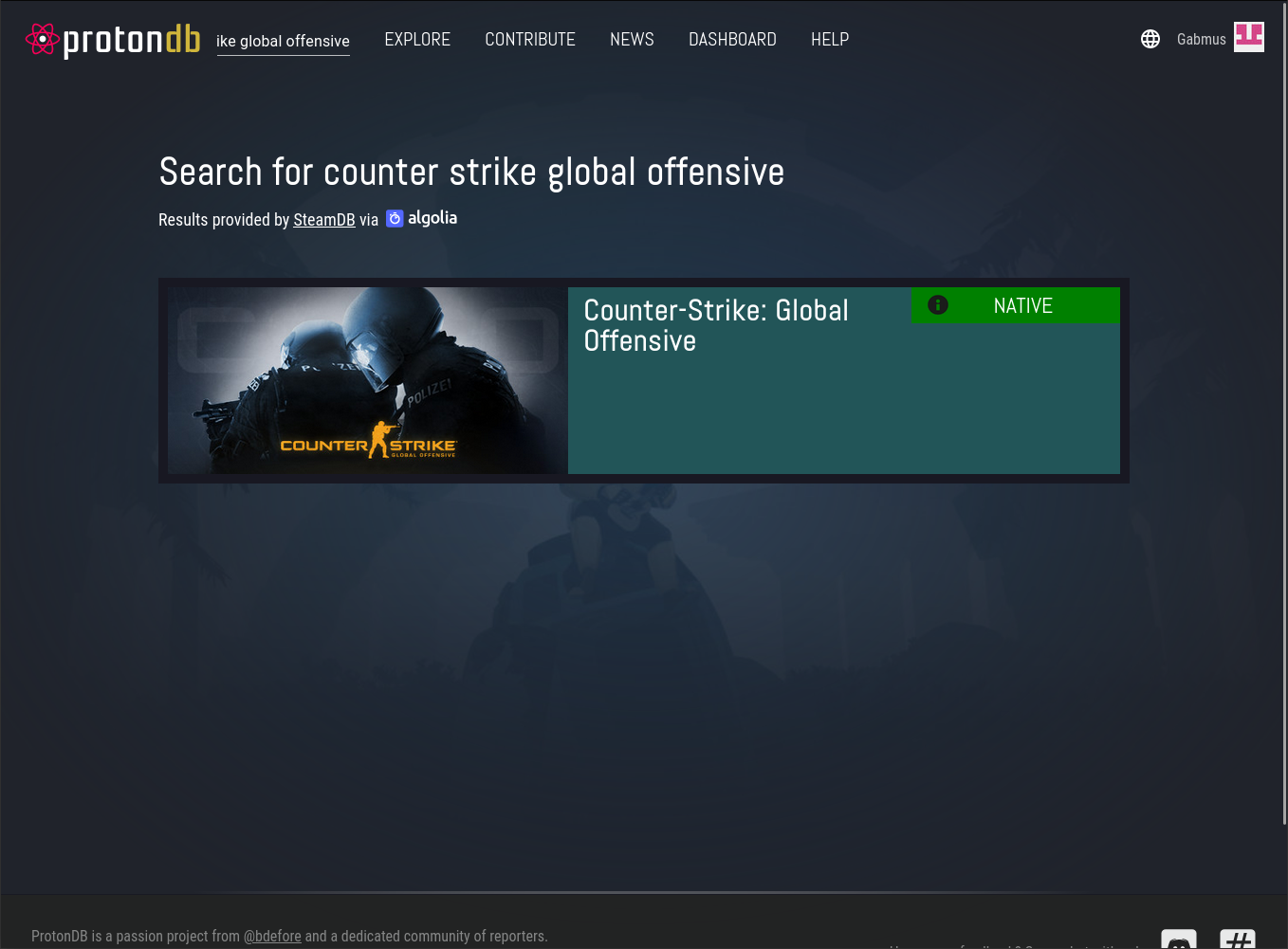 There it is, it says Native. Native games are built specifically to run on Linux systems, so they’re even better (mostly) than Platinum, as they won’t even need Proton to work. 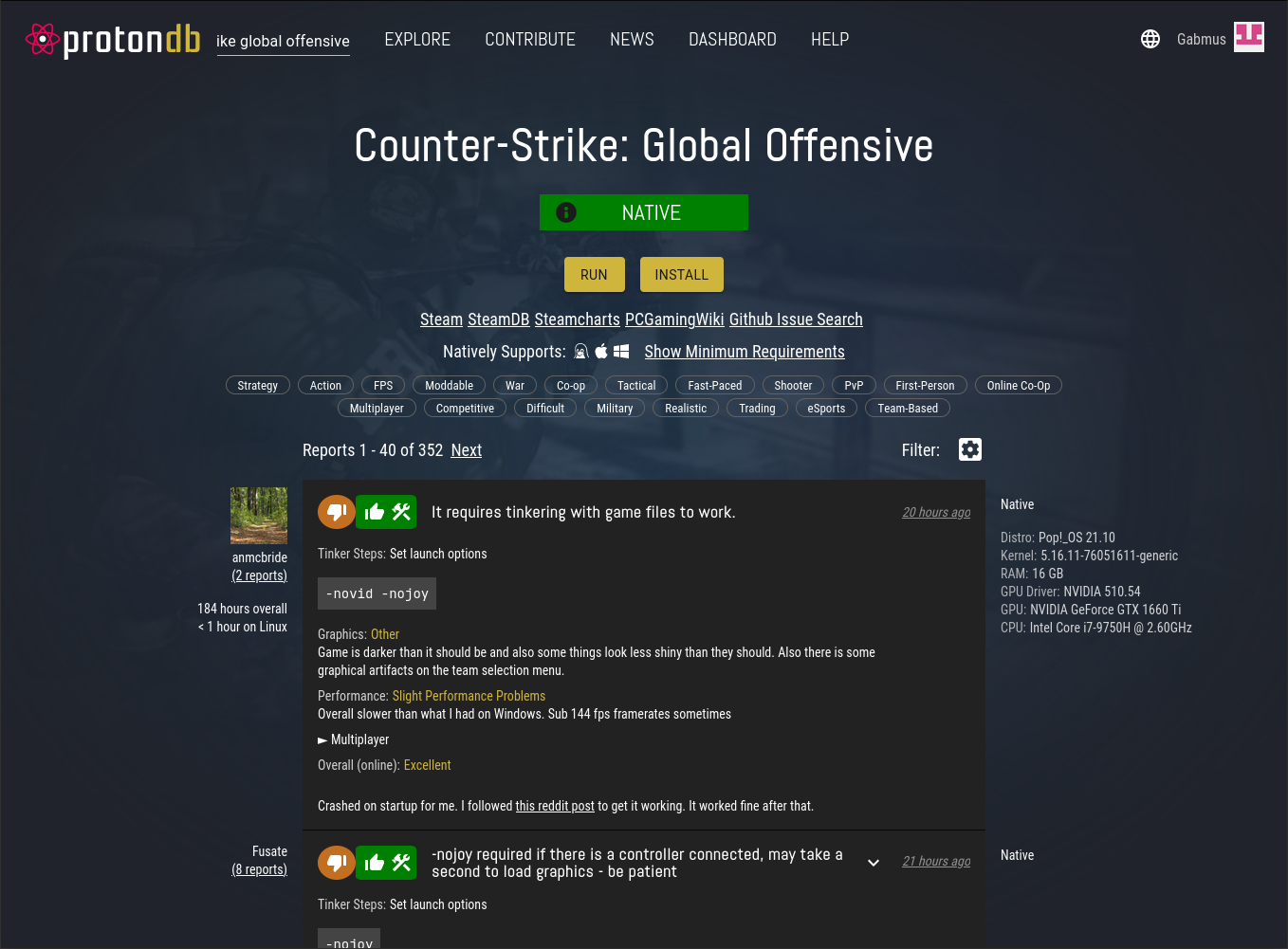 As you can see, even native games aren’t perfect. CS:GO is a great example of this, since it needs a couple of launch options to work on some systems. Of course your mileage may vary, but if you’re getting crashes or weird issues, try to follow the steps provided in the compatibility reports. Platinum, that’s a great sign! Let’s click on it and see if there’s anything else we need to know. 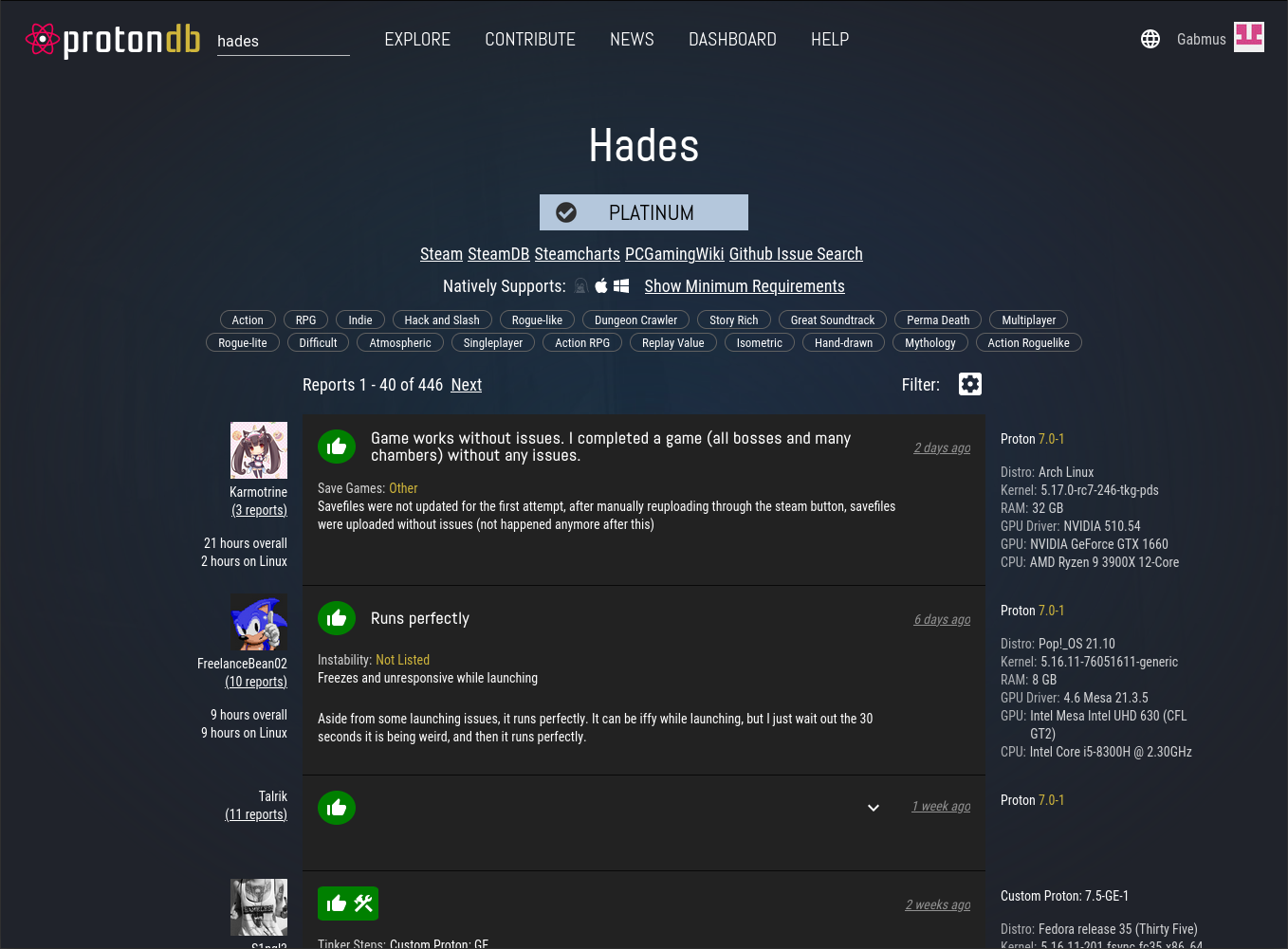 Doesn’t seem like it! Everyone seems to report that it just works (and I can confirm, plus Hades is a great game). 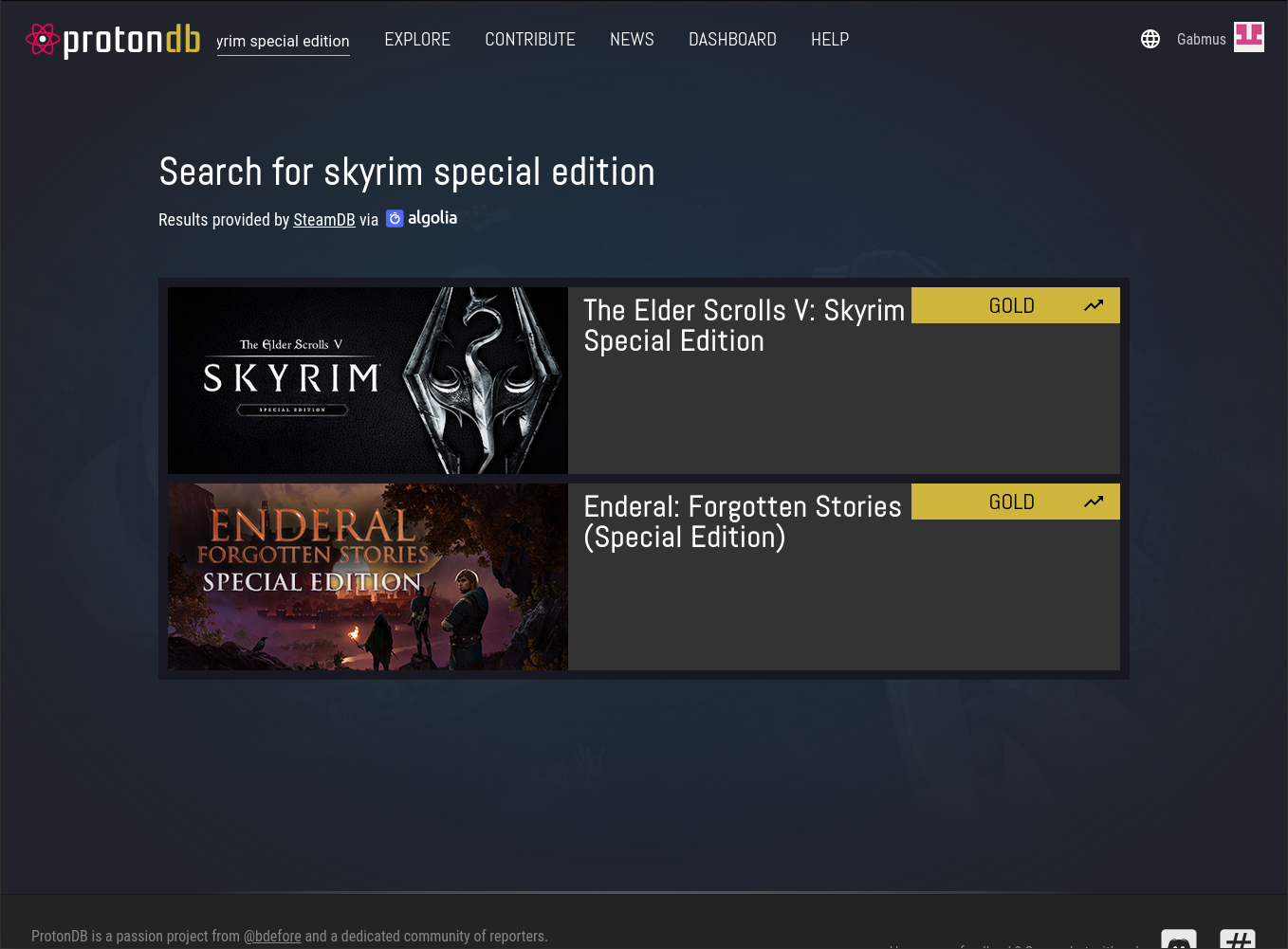 That’s Gold. A good sign, but let’s see why it’s like that, and what we can do to fix it. 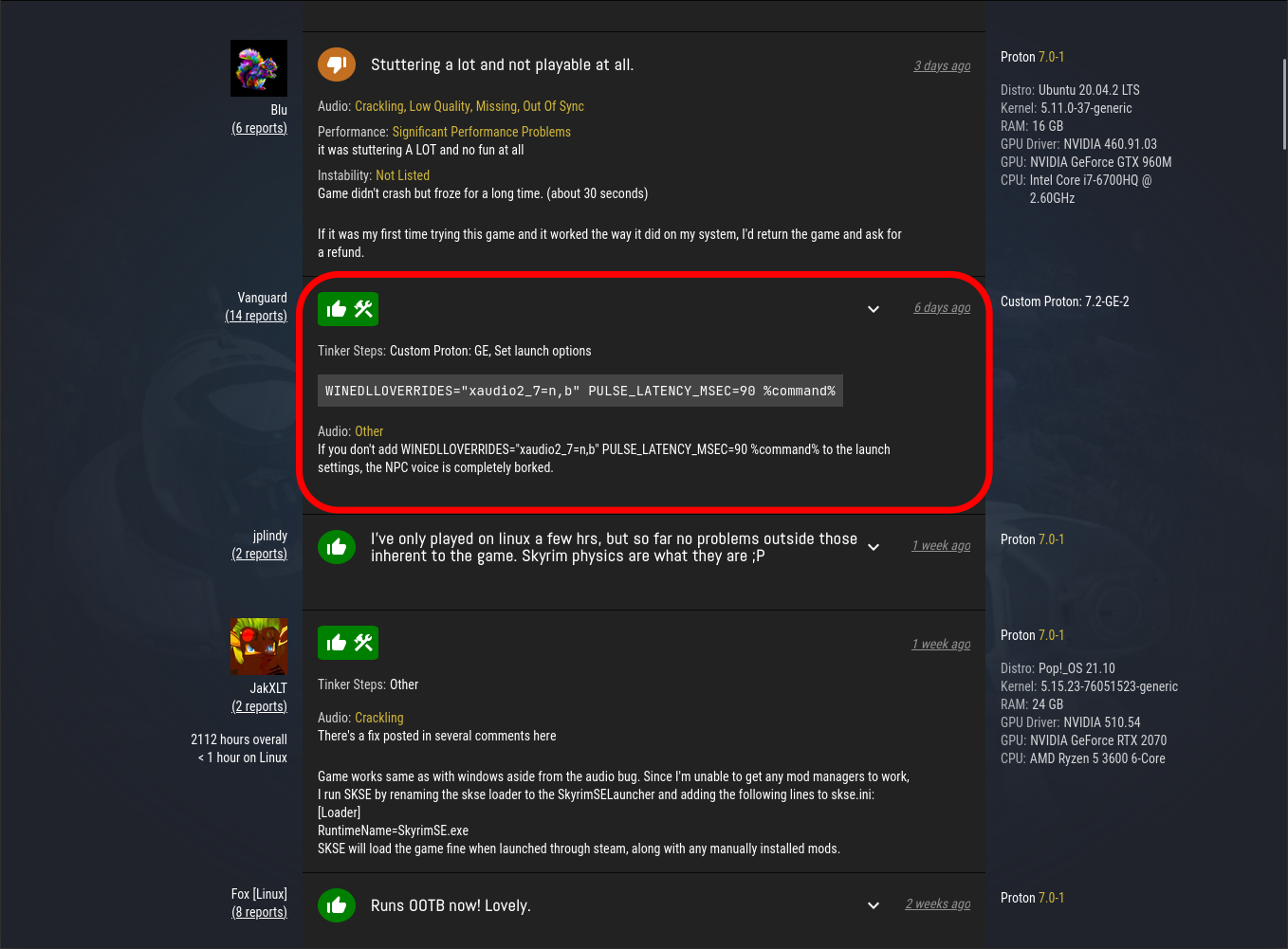 Apparently there are some issues with NPC voices, but it seems that the solution is simply adding some launch options. That’s easy enough, so it should be good to go!

Now, let’s search for something the cool kids are playing, say PUBG. That’s marked as borked. It means it won’t work. Just out of curiosity, let’s see why that is. And right there is the reason. PUBG uses the BattleEye anti-cheat system, but for some reason they haven’t enabled Linux support for it (the process to enable Linux support consists in sending an e-mail and letting BattleEye do the rest).

Well, that’s too bad. Fortunately there are lots of other great games you can play on Linux and the Steam Deck. In particular if you’re looking for a Battle Royale kind of game, I suggest you check out Apex Legends: it works great and it’s been recently marked as Steam Deck Verified.

Let’s move on with a game that recently landed on PC: Final Fantasy VII Remake.

Wait, wait. I hear you saying: “ehrm… it’s not there”. Yes, you’re correct: you won’t find it on ProtonDB. That’s because you won’t even find it on Steam, since it’s (still?) an Epic Games Store exclusive on PC. ProtonDB collects compatibility reports for Steam games, but not from other sites.

Unfortunately there isn’t an up to date central resource for non-Steam games like ProtonDB, so you’re probably better off just searching for “name of your game linux” on a regular search engine (for what it’s worth, I’ve heard that Final Fantasy VII Remake works great on Linux).

For games from GOG or the Epic Games Store, once you know they’re compatible, you can easily install them by using the Heroic Games Launcher.

And that’s it for today! Hopefully you’ll find this little guide useful. Let me know what you think, and ask any question you have down in the comments. Keeping on the theme of using non-Steam games, today I’ll tell you about the Heroic Games Launcher. Heroic is a community made Game Launcher that allows you to download, manage and play games you might have bought from GOG or the Epic Game Store. This particular tool felt necessary since neither GOG nor Epic have a Linux client to speak of. With GOG you can just download the games you bought from their website, and then just install them manually, but as far as I know, with the Epic store you don’t have any choice (officially at least) but to use their Windows only client.

How to Setup Proton GE Proton is the secret sauce that makes the Steam Deck so great. Proton is a distribution of Wine, Wine is a recursive acronym that stands for Wine is not an emulator. It’s a compatibility layer that implements the Windows API to work on a Linux system. To put it simply, Wine — and consequently Proton — lets you run Windows only games on a Linux PC, and this includes the Steam Deck!